Sometimes I wonder about my own sex. How can women be so fickle?

They abandon, they discard, they switch — like it’s no big deal, like the words commitment and loyalty meant nothing.  I always shake my head when I meet them or read about them. Don’t they know how significant their relationships with their purses are? I guess not.

I’m the old-fashioned type, faithful as a dog. When it comes to purses, I am a serial monogamist.

I buy a new purse once every several years. Usually, I spend too much, which cements the relationship immediately. I have to recall what Pat, my late mentor, said about amortization: The longer and more frequently you wear or use something, the greater bargain it becomes.

Or something like that. Every time Pat explained it to me, I was in some kind of shame spiral about a recent purchase and couldn’t concentrate too well. But she always explained her amortization theory with so much conviction and verve it was like being slapped in the face. You know, the female friendship version of tough love. It hurt, but it worked.

I miss Pat and I miss her tough love. But sometimes I can still hear her talking to me. Stop whining and start amortizing.

My current love object/purse is a well-worn black Tod. My Tod and I have been together through droughts and downpours, the better part of a two-term presidency, West Texas and the Amalfi coast, a cool housing market and a market so hot it blisters your digits.

We have bonded completely. I hardly recognize my arm without my Tod on it. But we are having problems together. We are both looking a little shopworn and shabby.

Don’t get me wrong: My Tod is still a very attractive purse with many years of service ahead of him. It’s not his fault; it’s mine.  I have changed — or at least part of me has. My damned shoulder is giving out, carrying this heavy purse around all the time, with its interior load of everything I might need if I were ditched on a desert island for all of eternity.

My shoulder slants, it aches, it’s screaming for me to stop. (Don’t tell me to change shoulders.  I’m talking about my good shoulder. I’d have to be hospitalized if I carried it on my right shoulder a/k/a the bad one.)  I am now officially lopsided, sloping to the left both physically and politically. I would do a lot for my purse, my faithful companion of so many years, but it’s not like I’m a sherpa or something. Enough!

So, with the help of a sharp, energetic saleswoman at the Washington, D.C. Babette branch, I found my new squeeze.  Smaller and lighter and — yes — younger.  This new purse, a Lupo, understands me and my needs.  It won’t slow me down. 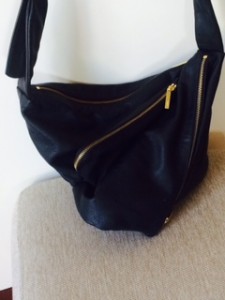 Carefully, deliberately, I transfer items from my old, trusty Tod to my new Lupo.  This time, I tell myself, I will only carry necessities.  I will lighten my load.  I won’t make the same old mistakes.  I’ll make new, different, better mistakes.

The first 24 hours pass lightly and blissfully.  But when I go out, I realize I need to expand my definition of “necessities” to include my compact.  And a pen.  And a small writing tablet.

“I’ll bet,” my husband said, quite unhelpfully, “that your new purse is going to end up weighing as much as your old one.  Wouldn’t that be funny?”

No, that would not be funny.  Not at all.  When you’re in a new relationship, you never need to be reminded that you carry your own baggage no matter who you’re with.

Besides, I remind myself, what do men know about purses?

Read So You Think Your Friends Are Tough? Try Mine