1) You are probably wondering how we got here — inside the Arctic Circle in Finnish Lapland. By jet, as it turns out, Tourism is a big business here. Children come with their families to see Santa before Christmas. Now, in January, all sorts of young adventurers and old nutcases come here. You can imagine which group we fall into.

We are here for a few days with our friends Jim and Hester Magnuson, 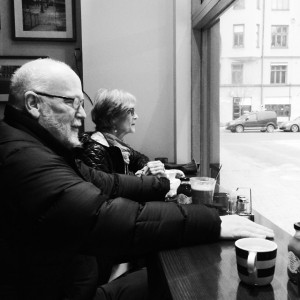 neighbors of ours from our West Austin ‘hood. All Jim and Hester had to do was mention they were taking some insane trip to Lapland in mid-winter and my husband and I promptly invited ourselves along. We do that all the time, according to our friend Nancy Scanlan, just because we once invited ourselves to a dinner party she was having with Valerie Plame. But that was different, obviously.

Anyway, Lapland. The Magnusons are here because Jim is researching a book, which I won’t spill the beans on if you torture me. I am that kind of friend. I may tactlessly invite myself to strange places, but your secrets are safe with me.

2) We are officially here during the coldest days of the winter of ’14-’15. So far, anyway. Last week, it even got up to something like 25 F, which constitutes kind of a heat wave. My husband claims we are lucky we hit Lapland during a cold front when the temperature plunged to MINUS 40 DEGREES FAHRENHEIT. People respect that kind of cold, he says. They would have snickered at us if we’d gone around bellyaching about a lame 25 degrees. But minus 40! We’ll pull that trump card whenever we can, kind of like our blighted trip tp Albania in 1998.

For once, we are smart enough to have dressed for the weather. We have on so many layers of clothes, we are so bundled and so layered, that we look like a pair of salt and pepper shakers. Hester, who has taken to wearing an outer gear of overalls with logos all over them, looks much like a filling-station attendant. Even our faces are wrapped in layers so our noses won’t freeze. Our eyebrows and eyelashes turn frosty, though. 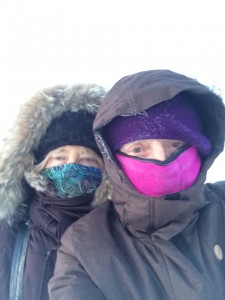 3) The cold! We all marvel at it, but can’t quite comprehend it, As West Texans, we feel we’re from a hostile environment — what with our blistering sun, our rattlesnakes, our droughts, our dust storms, our blue northers. But this is another level, a new kind of hostility. It won’t kill you as quickly as a rattlesnake, but you could lose your way and they would’t find your frozen corpse till July. I’m pretty sure this is what happened to one of the characters in Giants in the Earth, but I believe it took place in Minnesota. 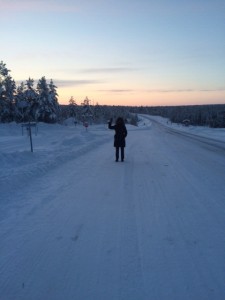 4) And yes, I still think and talk in terms of Fahrenheit and I know it’s deeply illogical and we’re out of touch with the rest of the world — but I’m tired of apologizing for it. At 65, I’m just a Fahrenheit kind of girl.

I recall the US was moving toward Celsius, then dropped it. My husband says it was Ronald Reagan’s fault. This surprised me. I’ve gotten used to blaming George W. Bush for everything.

5) I told you we were wearing many, many layers — long underwear, sweaters, multiple scarves, hats, and gloves. You lose something when you’re packing on all those layers — most quickly and specifically, vanity and an insistence on fastidiousness. Do I really need that daily shower when it’s freezing in our room and the faucet offers up a thin stream of tepid H2O? No, I do not.

6) Our first night here, we slept in a glass igloo. We could see the black sky and the bright stars from our beds. At around 11, the skies began to move and shift with wisps of white and gray and pale lavender. Don’t tell me the Northern Lights have to be vivid and technicolor; ours were more subtle and pastel. I suppose I could search the internet to offer up an explanation of the aurora borealis, but I won’t. Sometimes, I want magic more than science — and our Northern Lights were pure magic. 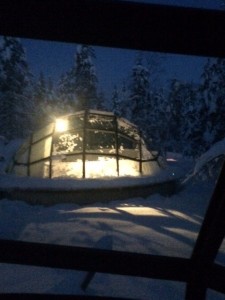 7) Earlier, I mentioned that this resort is currently packed with young adventurers. Seeing them, I quickly realize I was never an adventurer, even when I was their age. They spend their days snowmobiling and dogsledding and skiing. For someone of my neurotic disposition, walking from our cabin to the restaurant is a great adventure, more than enough for me.

8) Traveling with another couple, you learn a lot about one another. For weeks, I’d mentioned to the Magnusons that we’d all enjoy a sauna at my husband’s cousin’s wonderful farm in Sweden.

“You have to get naked for saunas, don’t you?” Hester asked suspiciously.

Our last morning at Cousin Per’s farm, he fired up his outdoor sauna for us. Hester went into her old routine about not getting naked, you can forget that right now. But then she could see the other three of us were intent on it, so she went along.

That’s how the four of us ended up sitting together in Per’s sauna. baking as long as we could bear it, then traipsing outside to duck into a hole Per had cut in the iced-over lake. Hester and I sat and compared the many imperfections of our bodies, as women are somehow prone to do.

But you see? You can have adventures at any age. It’s all in how you define them.