By the time my husband and I left Finnish Lapland, the temperature had skyrocketed to minus 3 Fahrenheit. We flew to Helsinki, then Stockholm, then boarded a flight to Paris.

The hard, icy tundra, a world of white and gray daylight hours and long, black nights, fell away. We glided into Paris watching the city’s golden lights beneath us. We’ll be here for three weeks.

A great violence had come here and, we hoped, had departed. But who knows? Millions had marched in the streets and “Je suis Charlie” signs were propped in store windows. The city and its people were tense, we’d read, but maybe we didn’t know the city well enough to recognize it on our own. The city looked much as it always had to us — graceful and charming and dazzling.

We first came here in 1972, when my then-boyfriend and I were broke college students. We stayed in 6th-floor walkups in the student quarter and shared bathrooms with anybody else on the same hall.

In France, I first learned you could actually eat the green curlicues on the dishes, which no one at the Furr’s Cafeteria in West Texas would have dreamt of doing (our seasonings were all taken care of by Lawry’s Seasoning Salt, merci beaucoup). A haughty waiter who towered over us one night taught me that “banana” was feminine, not masculine, but I’m still not sure I concede the point. Maybe we just spoke French differently in Midland, where bananas remained the he-men of fruit.

The next morning, my husband and I wandered through the winding streets of the 6th and 7th arrondissements. They create the most elegant window displays on earth here — languid mannequins draped in cashmere and silk and hauteur. Every few steps I stopped and couldn’t move, drawn in by the opulence and the winter sale signs. My husband, oddly, was less intrigued.

“Go to Bon Marche,” the young Frenchwoman who let us into our temporary apartment had said. We went to Bon Marche 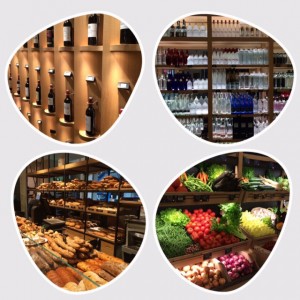 — an immense department store full of luxury goods and winter sales and the most glamourous food aisles on the planet earth. I went into my own version of a retail frenzy: I want to be elegant, I want to be well-dressed, I want to be French, damn it. Somehow, it all seemed to involve scarves. Send me to this town and I want to be Isadora Duncan, sans the final scene.

“This is how you tie a scarf,” the thin, beautiful, middleaged woman told me at the scarf counter at Bon Marche. She went into action, creating a small work of art above my collar bone. I watched her, but promptly forgot what she’d done. I am simply too American to tie a scarf artfully.

Her name, she told me, was Amalia Vairelli, and she’d been a top model in her youth. “I was the muse,” she said, “to Yves St. Laurent.”

So she’d traveled and met everyone and whooped it up and had done whatever muses do. But time passed and gravity had its way with her and St. Laurent made his final exit — and, along the way, she’d spent all her money. “So now, I work in scarves, from time to time so I can support my art,” she said, folding the scarf back into a soft rectangle.

A muse! I’d never met a muse before, much less a muse to Yves St. Laurent. I wasn’t even quite sure what muses did, except to look glamorous and inspire geniuses to creativity. They were probably the same kind of women who got rock songs written about them. You’re either that kind of woman or you’re not, and I knew which group I fell into. That other kind of woman — like Isadora Duncan, I suspected — had probably been born knowing how to tie a scarf.

We went back to our little apartment and I fired up my iPad. There was Amalia Vairelli at the height of her beauty, looking soignee and fiercely elegant and there was Yves St. Laurent standing close beside her, looking inspired.

“What a life you must have had,” I’d said to Amalia Vairelli as she tended to her small domain of soft cashmere scarves.

She had shrugged again, the way only a Frenchwoman can shrug. “After all of that,” she had said, “at least I got to keep my soul.”

10 comments… add one
Rain In the Street, Not in the Heart
Observations From the Top of the World