Except for the Alamo and a few other historic sites, Texans aren’t sentimental about preserving the past. My husband and I, who are Texans by birth or habit (even when our state infuriates us every several hours), are part of a culture that razes the old and lionizes the new.

We are all about progress and moving on. We’re descendants of pioneers who kept pushing west, always looking for something better, newer, different, till the West finally ran out or the horse died or Ma said she’d shoot Pa (that dreamer with stars in his eyes and itch in his feet) if they didn’t stop moving on and agree to settle down now.

So, it’s striking for us to spend almost a month in Paris, with its centuries of vivid, intact history and its stubborn and haughty refusal to change much. They seem to have found perfection in their city’s great boulevards and narrow cobbled streets, its grand cathedrals and majestic monuments. Who wants to mess with perfection?

And, wandering around, marveling at its stunning views and irresistible charms, who could argue with that? Not us.

My husband and I have walked miles through the cold and on-and-off rain. From our small apartment in the 7th arrondissement, we’ve crossed the Seine into the Marais, traipsed on to the Pere Lachaise Cemetery with its marble remembrances to the long dead, the new dead, and the famous dead. By then, we were too tired to hunt down the graves of Oscar Wilde or Edith Piaf or Colette. and we didn’t really care about Jim Morrison. So, being Texans, we moved on.

(“Either that wallpaper goes — or I do,” Oscar Wilde is reported to have said on his deathbed. Knowing Paris, you have to assume the wallpaper is still there.) 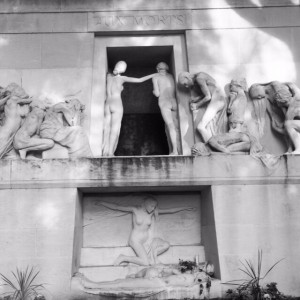 Coming back, we glimpsed a young Parisienne on a street close to ours. Her hair looked like Jerry Hall’s back when Jerry used to hang out with Jean-Paul Sartre (no kidding). She walked along carelessly on high heels through the cobblestones, pulling a wheeled suitcase behind her, smoking a cigarette, and looking deeply bored by the meaninglessness of life.

A few days later, having gnawed our way through the menus of restaurants close to us. I read about a foreign correspondent’s recommendations on the 10 hottest Parisian restaurants. “There’s one really close, in the 6th arrondissement,” I told my husband. “You have to make reservations years in advance. But if you’re willing to come at a really unfashionable time, you can maybe get in. It’s supposed to be very earthy but refined.”

Since we wrote the book on being really unfashionable, we happily showed up at 3:30 on a Saturday afternoon after starving ourselves the whole day. The restaurant, Le Comptoir du Relais, looked like any number of so-so establishments in the area. We went to the end of a line outside, feeling very much in the know — especially when we learned the people in front of us had just hopped off a flight from Tel Aviv to get there.

Now and then, the hostess admitted a couple of people from the line and led them inside. Then, it started to rain. “God, I feel sorry for those losers sitting outside,” my husband said, nodding at the outdoors tables full of people eating and drinking, smoking and shivering, “It’s only” — he checked his iPhone — “36 degrees.” 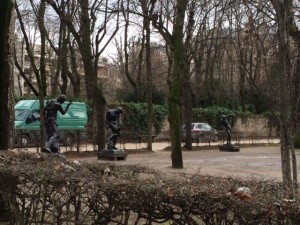 Oh, sure, that was a lot better than the minus 40F in Lapland, but our blood had already thinned dramatically. Paris has its own kind of chill that works its way into your bones.

The hostess appeared again and led the Israeli couple inside. When she returned, she looked a little apologetic. There were no more seats inside the restaurant, she said. We could either wait an hour or join the shivering patrons outside.

So this is how you find yourself sitting outside a hot Paris restaurant on a wintry late January afternoon, huddled in your coats and scarves and hats, eating with your gloves on, trying to ignore the rain that was just inches away. Next to us, the small crowd of patrons laughed and talked and blew cigarette smoke in our faces — and who cared, since the bursts of smoke were almost as warm as the feeble heaters above us?

In fact, who cared at all, when the escargots were delectable and garlicky, the bread crusty and warm, the veal stew rich and hearty, the small chicken moist and tender? For dessert, I ordered ice cream and my husband asked for a drink. The waiter returned with my ice cream and a layered dish of cream and liqueur.

At first, my husband argued he hadn’t ordered the dessert and the waiter went off in a huff. By the time he returned, we had already eaten most of the dish, which I’d announced was going down in my personal dessert hall of fame.

What’s the country and Western lyric — something about how if loving something is wrong, I don’t wanta be right? I think I hummed it all the way home.

8 comments… add one
Meeting the Neighbors
Feasts That Move On