Note: This is the second of a few posts written while traveling through Eastern Europe. They are fragmented, I am fragmented, you know how it goes.)

5) When they travel, other people seek out museums and cathedrals. I seek out odd corners, bars, coffee shops and other people. I am resigned to my status as a lowbrow no matter where I go.

So, I’m pleased to meet an English-speaking Polish taxi driver in Gdynia as I am going to my sister’s apartment. His accent verges on the cockney — a result, he says, of spending his winters in London. “London winters are so much nicer and warmer than Polish winters,” he says. (I once spent a winter in London and, let me tell you, I consider this an extremely depressing remark.)

But anyway, it’s summer now and we’re both in Poland and, over the course of the drive, he tells me other experiences that improved his English. In the ’80s, for example, he once worked as a waiter on a casino boat that went into the Gulf of Mexico from Galveston. One of the men at the table he was serving — a Texan, of course — said he needed a Dr Pepper, which was pretty uncommon then except among our own kind.

He needed a doctor! The waiter/driver went racing into the kitchen to report a medical emergency. When the ship’s physician showed up, he escorted him to the Texans’ table and apologized that the doctor’s name wasn’t Pepper. After they picked themselves off the floor, all the Texans at the table left him a great, big tip, the driver said.

6) I am with my sister Ellen and her student Mik touring the old city of Gdansk. (“Discover the city of the inventor of the color photograph and the bulletproof vest,” a nearby sign says. “Warmest place in Poland and the sunniest,” another sign proclaims. it’s also where the Solidarity movement started.)

Mik, who is learning English from my sister, is 17, smart and funny, and an aspiring filmmaker. If you saw the photo he posted of us together on Facebook, you may have noticed I looked like a small stuffed animal next to him. It’s not my fault; it’s because he’s 6’9″. (I persist in believing I am still the perfect height of 5’7″. I don’t need to further prove myself by submitting to demeaning measurements. So leave me alone.) 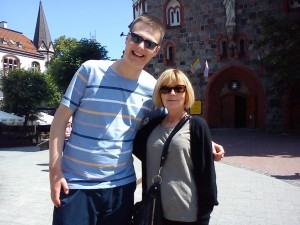 Anyway, I ask Mik about another nearby town. “It’s a shithole,” he says.

We go on to talk about another town. It, too, is a shithole, according to Mik.

I find this quite fascinating, not because I’m interested in seeing more shitholes in my lifetime (I think I have already reached my quota), but because I do have an avid interest in language and, more specifically, swearing. It seems to be that Mik is using the term shithole with complete aplomb (as one should), pronouncing it perfectly and slipping it into his conversation casually. I’d say he’s doing well in English, but he’s fluent in swearing.

(I say this all as something of a connoisseur, having once sat near a Frenchman wooing an American girl at a cheap Paris restaurant in 1972. The guy — who looked much like Dominique Strauss Kahn, as I now recall — kept trying to impress the girl with his knowledge of the American language and all things American. This mostly involved his repeated use of the word “bullshit,” or, as he loudly put it, “booooll-sheeeeet.” Everything, from the bourgeoisie to college to the pate to the Beatles was boooolll-sheeet, according to this guy. After an hour of nothing — rien — but “boooolll-sheeet!” — I was so irritated, I couldn’t even eat dessert.)

The fact is, though, Mik is so fluent in swearing, it makes me suspicious. You don’t pick up this kind of fluency on Rosetta Stone. You pick it up from a —

“How did Mik learn to use the word shithole so well?” I ask my sister when Mik is off getting coffee.

She says she has no idea. None. You know teenagers; they absorb language from every source.

Later, when my sister is off at a distance, I ask Mik the same question.

“Ellen taught me,” he says.

I am not surprised. Our family knows swearing and we know shitholes.

7) I am incapable of traveling anywhere without something to read. On this trip, I have Hilary Mantel’s latest novels, Wolf Hall and Bring Up the Bodies, among others, on my iPad. But, in the New York airport, I panic. What if I run out of battery on the flight? So, I buy a hard copy of The Last Gunfight by Jeff Guinn — the true story of the O.K Corral shootout.

For much of the ensuing trip, I flit and skip over centuries from Tudor England to Tombstone, Arizona, and back again. Excellent books, although not terribly reassuring if you want to marry an English tyrant or a Wild West hero. As far as the more recent, American past, it’s disillusioning: Doc Holliday was a dentist, not a doctor; Wyatt Earp was a Republican; and most of the Earp brothers took up with former hookers they didn’t bother to marry.

And, like all imbroglios — like 16th-century European wars about religion, say — the O.K. Corral lacked purity. The blood poured out, the bodies piled up, the explanations were self-serving, the story muddled and unsatisfying.

You want reassurance, you want heroes, you want morality lessons? Try myths, instead.

Read a post about what NOT to write in my obituary

And/or read part one of this series