How can you ignore history when you’re living down the street from it? My husband and I were walking down Rue de Varenne, where we’re living for another few days, and noticed a marker.

It commemorated Edith Wharton, who, as it turned out, used to live down the street. Edith Wharton! We only missed her by a few blocks and 77 years. I tried to imagine her coming and going on the narrow sidewalks, then bent over her desk writing masterpieces. I was betting she had the exact same kind of ancient casement windows we do, with beaucoup de charme and zero d’insulation. 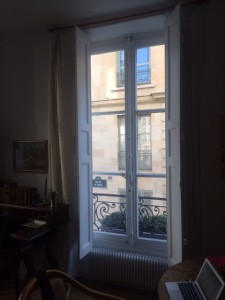 We kept going several blocks to the museums at Hotel des Invalides. There, you can see Napoleon’s tomb — so lavish that half the tourists in Paris seemed to be posing for selfies in front of it. Selfies aside, it’s odd to see such reverent treatment of a guy whose name mostly makes the rest of the world think of Trafalgar, Waterloo, and short guys with big ideas.

But then — as has already been noted more than once — the French are diffferent from you and me. We skipped the selfies and moved on. 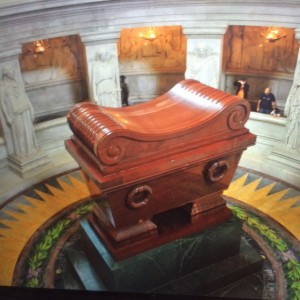 The adjacent museum about World Wars I and II was subtly overwhelming. My husband and I walked through the exhibits of uniforms and weapons, maps and photos and videos.

Here, we had personal ties. My grandfather, a midwestern farmboy, fought in the first World War. Both our fathers were in Europe in World War II.

Blinded for a month by poison gas, my grandfather came back a harsher, angrier man, my grandmother had always said. He was never the same. Both our fathers –well, who really knew about men of that generation? They rarely talked about the war when we were growing up. Now, at 97, my father-in-law speaks of it often. But he has almost no one left to remember it with.

These were American war stories, though. Going through a European museum about those same wars, you quickly realize how different the perspectives were when warfare rages on your own continent and blood stains your own dirt — when you aren’t protected by a broad ocean.

During the first world war, France suffered more than 1.3 million dead. This number was larger than for any other country, except Russia, with its far bigger population. Then, Hitler came to power and began threatening aggression less than two decades later. No wonder France was so ill-prepared for another war.

How does France explain World War I? World War II? That’s what we’re trying to understand coming here. How different are their stories and histories from our own?

Traveling, I think my husband and I try to be less American and rooted in our own pasts and biases. We try to be more open to others’ perspectives. Sometimes it works, sometimes it doesn’t.

Sometimes, I never feel more American than when I’m out of the country. Maybe you only think you can take off your own skin.

He pointed excitedly to a description, translated into English, about the Nazis’ occupation of much of France. Up to that point, the English translations had been well-done and smooth. Here, command of the other language faltered.

“It’s like they forgot how to translate,” he said. “Like it was too upsetting for them to continue.” 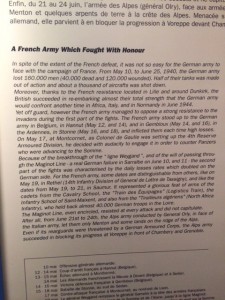 We talk about it later, sitting in the museum cafe and drinking coffee. How honest are our own museums? What do they say about slavery, the genocide of the American Indians, the War in Vietnam, the invasion of Iraq? What glaring omissions do foreign visitors find in our historic sites?

That night, we ate at a nearby rstaurant, A La Petite Chaise, which claims to date back to 1680, making it the oldest in the city. Musset, Georges Sand, and Chateaubriand all dined here, according to the back of the menu. Even Colette was once there, admitted to a rowdy writing group of men who published the satirical magazine “Le Crapouillot.”

Colette, it was emphasized, was admitted to the group only in her capacity as a writer –and not as a woman. After missing her at Pere Lachaise Cemetery, how nice to find her nearby in whatever capacity she had to assume.

7 comments… add one
The Snowflake
Rain In the Street, Not in the Heart