In years past, I’ve met my daughter in other cities for Planned Parenthood marches and demonstrations. This year, we met in Chicago and it was personal, not political (although she and I both tend to confuse the two).

We’d hoped for a glorious autumn weekend, but it was rainy, windy, and cold. Who cared, though? We walked the busy downtown streets, we shopped in the stores, we ate in wonderful restaurants, and we drank wine and huddled and talked in our cozy hotel room. Bad weather forces its own kind of fun.

My daughter is 32 now and recently married. She lives in Seattle. She spent her first 18 years with us, but has been gone the past 14 — on both coasts and in the Midwest, in college and grad school, at various high-powered jobs. Gone almost as long as she was with us — it surprises me to realize that, even if the math isn’t hard. How can that be?

When you’re pregnant, then when you have a baby and young child, you’re awash in advice from experts, family, friends, and total strangers. You can’t pass a nano-second without getting buttonholed by some busybody or another who wants to make sure you’re doing it right. (Which you’re not, of course. From conception to college, you’ve been bungling it right and left and center, according to somebody. Perfect Parents exist only in their own tiny minds.)

But being the parent of adult children — nobody tells you about that. Maybe all the experts have died or something. There’s nobody to inform you about what I’m convinced may be the longest, most complicated relationship any of us will ever have with another being. Think about it. You start out with a completely dependent and helpless little being who can do nothing for herself. She sleeps, she eats, she screams — and you are her entire world.

Just as you’re getting kind of competent at this tiny-baby business, she grows on you. Toddler to kindergartener to teenager, she gradually needs you less and less. Step back, you tell yourself. Step back. Give her room.

And then she leaves. And comes back, but she always leaves again. She changes so much, and so — you grudgingly admit — so have you. 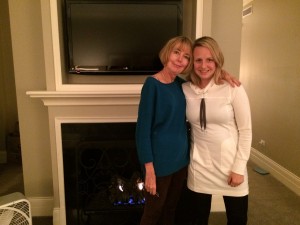 She’s grown up physically and emotionally; she is taking on the world. And you? This is a great time of your life. You’re healthy and working and happy, even if you doctor did mention you’ve shrunk half an inch.

But it’s a different era of your life, quieter and more contemplative. Taking on the world is for the young. Given the choice of waxing or waning (not that anybody seems to be giving you that choice, but still), you’ve waxed and been waxed enough. It’s somebody else’s turn.

So you haven’t exactly reversed places in the world, but the changes have been vast and profound. Can you think of any other relationship that upends itself so completely as the parent-child relationship over time?

Who needs who more these days? Who are you to each other now? Not who you used to be — but what, exactly? Nobody’s lining up to tell you; you’re on your own.

Or maybe not. As we walk and dine and shop our way through Chicago, as I notice I am once again whirling around when a younger female voice says, “Mom!”, as we talk and laugh and sometimes cry together, I realize once again I’m with a smart, funny, delightful, and strong young woman who has definite ideas about what our relationship should be as two adult women.

It’s a funny business, trying to figure out where you are in this life. How wonderful to have someone you love so much to do it with.

Read about What We Keep

7 comments… add one
Three Thousand Miles and 36 Years Away From the Ripcord
Frankly, My Dear