“Marriage,” the minister said, “isn’t something you’ve entered into lightly.”

It was contagious. Within seconds, the whole group of family and close friends laughed loudly.

No, these two grooms had not entered into marriage lightly. They had, in fact, been together 36 years to the day. Thirty-six years that began at a Houston club (the Ripcord, we learned), spanned the next three-and-a-half decades in Texas and many other places, and was now being made official in New York City.

Like any long-term relationship, it hadn’t been easy or simple. Unlike most other long-term relationships, though, it had played out against a backdrop of politics, law, religion, strife, prejudice, and massive social upheaval. The most personal and individual of emotions — romantic love — had suddenly become everybody’s business, spilling into the evening news, demonstration placards, and heated arguments.

No, Dan and Jeremy hadn’t entered into marriage lightly. No wonder they and their wedding guests slipped from laughter to tears and back so easily. We were all celebrating a life together and seismic political change — even if we had to travel 1,800 miles to make it legal. Someday, that long trip will seem ridiculous, but right now, we were in a glamorous New York hotel and we were going to toast happiness and love and we were going to dance. What could be better? 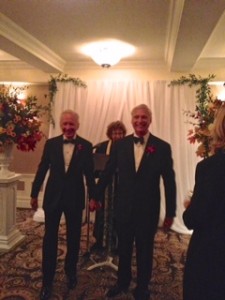 “You’re going to write about this in your blog, right?” asked Walter, one of our neighbors from Austin.

“Of course I’m going to write about it,” I said.

“OK,” Walter said. “I won’t email any of my friends about how wonderful the wedding is. I’ll just wait for you to write about it. I hope you get it right.”

“Mmmmm,” I said. I hoped I could get it right, too. You never know.

Behind us, the small band and cabaret singer were warming up. I talked to Dan and Jeremy’s personal trainer, Sam, who told me how much he’d learned from the two of them — about being a man, a good man.

It made me think of what I’ve learned from them, as well, in the four years I’d known them. They had taught me that two men could be as committed and romantic as any heterosexual couple. Seeing them at their wedding also reminded me of how openhearted and emotional they both were — qualities you don’t always associate with men. You learn from your best friends, and Dan and Jeremy had taught me so much.

After the singer and band performed, the tiny wooden dance opened up to the small party of wedding guests. They played Ray Charles and the Beatles as most of us danced.

Between numbers, Walter approached me again. He’s a shrewd businessman who’d sensed a bit of uncertainty on my part, and he wasn’t going to let it pass unnoticed.

All I could do was think of the scene on the tiny dance floor, where so many couples had danced together — gay and straight, long-married and virtual strangers, men with men, women with women, men with women. The couples had re-formed again and again, as others cut in, and swooped and swirled and bumped into one another.

After a while, we weren’t separate couples or individuals any longer. We had merged into something bigger and more joyous.

I don’t know if you can feel the love in that. But let me tell you, it was pure magic.

Read about The Death of the Other Ruth Pennebaker

6 comments… add one
The Rest of the Story
Who Brought the Map This Time?