Maybe you thought everybody at the recent South by Southwest festival was young, hip, whiplashed into skinny jeans, fedora’d, tattooed, drunk and/or preternaturally cool. If so, you must have missed me.

I was the deranged harpie screaming at the pickup truck that almost sideswiped me, the exhausted film-goer who spent the few remaining good years of her life collapsed on the sidewalk while waiting in line for yet another movie, the frantic coffee guzzler, the canny enthusiast who picked out movie seats based on their proximity to the women’s restroom, the early-bird seat-holder who glared at your backpacked posterior when you tripped over her feet and didn’t say “excuse me,” all the time muttering questions to the universe about whether you were raised by wolves or hatched by homicidal chickens.

Yes, that was me!

I was also the downtown Austinite who was happy to see you all clearing out after 10 days of bacchanalia, trash, sidewalk vomit, and ear-shattering mega-decibels of music and cacophony and wailing ambulance sirens.

But, still — don’t feel sorry for me. I had my fun, too, in the midst of the hazy and muted and oddly pleasurable joie de vivre that persists after both pride and skin elasticity have departed and you no longer — how to put it politely? oh, yes! — when you no longer give a fuck.

So, I hotfooted it from movie to movie, seeing documentaries and feature films picked out on the basis of my current mood, rumors, reviews and whether I liked the title or not. Here are two true SXSW film stories:

Early on, I picked out the documentary Good Ol’ Freda as a must-see, since it told the story of the woman who was the secretary and personal assistant to the Beatles. Then, I heard from a very good source (i.e., another woman of my vintage who was waiting in a film line and had already seen Freda) that, although Freda was quite discreet and wouldn’t answer directly, it was pretty clear to her that Freda had slept with all four of the Beatles.

I personally found this so thrilling I could hardly stand it. “Freda’s a heroine for women our age,” I announced to no one in particular.

Then, I ran into my friend Barbara at another movie and she told me she’d loved Freda — both the movie and woman — too. She agreed that there was something there. Yes, Freda had been a bit evasive about what happened or didn’t happen, she confirmed.

Minutes later, Barbara went across the lobby to talk to another friend. I looked at the woman standing next to me. “Freda,” her badge proclaimed.

She said she was and introduced me to the documentary’s producer. They gave me a free ticket to a later showing, since I was such a big fan.

I knew what I wanted to ask Freda, but, as usual, I didn’t have the nerve. “Who’s your favorite Beatle?” I asked.

She said it varied. Right now, since he was in the documentary, it was Ringo. (I thought this was, perhaps, significant.)

After Freda and the producer left, I went running up to Barbara to tell her Freda had been in the lobby, we had talked, and she’d given me a free pass.

“Freda was here? Where is she?” Barbara wanted to know. “How did I miss her?”

“They had to go back to their hotel,” I said.

The more I thought about it, the more I realized: 1) since Barbara had beaten me (badly) the last time we played Scrabble, it probably served her right that I got to meet Freda and she didn’t; 2) given that Freda and I were now good pals, did this mean I was practically a Beatles intimate myself?; and 3) what did her remark about Ringo signify? Was she hinting at something?

I saw the documentary. I loved it. I’m still wondering about everything else.

My husband and I particularly loved Our Nixon, the doc about home movies taken by Haldeman, Ehrlichman and the impossibly young Dwight Chapin during the Nixon presidency. We’re both big Watergate junkies and veteran Nixon-haters, so we were delighted by the glimpses of Sam Ervin, the North Carolina senator who called himself “just an old country lawyer” as he eviscerated administration witnesses, and that pipe-smoking thug, John Mitchell, the attorney general who spoke so poetically of tits and wringers.

At the end of the documentary, the producers held a Q&A, first noting they had bobbleheaded H.R. Haldeman dolls as prizes for Watergate trivia answers. My husband nudged me. “You’re going to win one,” he said.

I had no idea what he was talking about. As you can see from this earlier, heartfelt post, he thinks I thrive on a diet of pure trivia and gossip. This ignores the fact that I am really a very serious person who spends her life pondering metaphysical questions and the imbroglios of the human condition. So I ignored him.

The apres-film presenter asked two or three questions that didn’t especially interest me. Then she homed in on a subject of great significance: Who was the former Bond girl who dated Henry Kissinger?

“I knew it,” my husband muttered loudly. “See?”

Later, when I toted my little HRH bobblehead home, I lamented that they hadn’t asked a follow-up question about what Jill St. John’s IQ was (162) or what Nora Ephron called Julie Nixon Eisenhower (a chocolate-covered spider).

I might not know which of the Beatles Freda slept with — still. But I do know a little something about the human condition when it comes to the Nixon administration. And I have the prize to prove it: 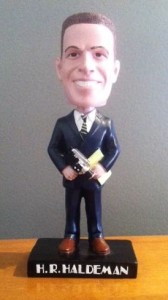 23 comments… add one
For Once, I am in No Rush
The Month TEDx Moved In With Us