We have been staged.

First, our stager strolled around the house, taking notes about everything that was wrong with it.  Which was a lot, it seemed.  The stager muttered something about our decor being “eccentric,” and I was pretty sure that wasn’t a compliment.

Later, she sent a long, detailed list of suggestions, room by room.

First, my husband’s treasured beer can collection had to go.

Oh, sure, maybe it looks to you like this is just a ratty conglomeration of used alcohol receptacles, but to us, it was more.  We collected dozens of six-packs of beer during one of our legendary road trips in 1974, when we toured the Midwest in our ancient Volkswagen bug.  We bought every kind of beer we’d never heard of, from Grain Belt to Leinenkugler to Buddy.  Then we returned to Austin, loaded down with a carload of six–packs and hosted a beer-tasting party.  Everybody got quite drunk and sloppy, as I recall, which was our definition of a good party in the 1970s.  Since then, the collection has followed us from Austin to Charlottesville, Virginia, to Dallas and now back to Austin.

“You’re getting rid of the beer can collection?” our daughter asked, appalled.  She sounded like we were giving away family heirlooms.  Given our shabby ideas of family heirlooms, she had a point.

“Just storing it,” I said quickly.  “We’ll bring it back out when we move.  The swankier the condo, the more intent we’ll be on the beer can collection.”  We are still our old, bohemian selves, I wanted to say.  It’s just that we need to go into hiding for the duration.  Whatever the duration turned out to be.  In other words, we were selling out to sell.  That sounded about right.  The sixties were over a long time ago.

But it wasn’t only the beer collection.  It was also the weird little Mexican statue that was the first present my husband ever gave me, back when he was my boyfriend.  Over the years, we’d festooned him with Hawaiian leis, Mardi Gras beads and, most recently, a paper cap from the Blue Bell Ice Cream factory.  His name was Montezuma and he had his marching orders. 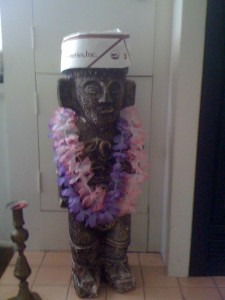 Equally alarming, the best present I ever gave my husband — the utterly tasteless sarcophagus wine holder, with the face that drops open into a tray — was deemed a little too attention-seizing.  Oh, my God, the history there!  When I’d glimpsed it in a store of crazy, over-the-top objets de craft, it had just screamed my husband’s name.  I’d been so proud, for once, to buy him the perfect present.  Now, it was going to be banished. 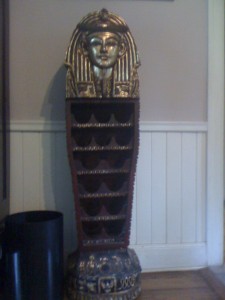 Also, the old clarinet my husband had painted in neon colors, the family photos, the bottles of volcanic ash from Mount St. Helen’s, the plaster of Paris armadillo, the refrigerator magnets in questionable taste, including the frazzled-looking woman who announces “This is now officially the worst fucking day of my life” and the more soignee woman who exhales a cloud of cigarette smoke and announces, “Maybe I want to look cheap.”  (No place says self-expression like the outside of a refrigerator.)

We got staged.  We made the changes.  Our house looked fresh and streamlined, I had to admit.  More generic, but that’s what seems to sell.

I wandered around it one day, watching how the early fall light streamed through the windows — a sight I’d always loved.  This is my favorite of all the houses we’ve lived in.  I loved it and wondered how I could leave it.  But maybe that’s the beauty of staging.  Already, it wasn’t really our house any longer.  It was waiting for someone else.

Read one of my favorite posts about visiting your grown son’s apartment: prepare yourself