It was my brother-in-law’s 60th birthday, so we celebrated.

You might feel a little sorry for us since we’re all so old (he is, after all, my husband’s younger brother), but you can cut out the sympathy bit and save it for when we’re all dead. Right now, we’re all doing pretty well and, the truth is, if you’ve been fortunate, you can afford to spend your blockbuster birthdays in better places than you could when you were, say, 25.

Which brings us to Italy — specifically, the Amalfi Coast. That’s where we went. It’s easily the most spectacular scenery I’ve ever glimpsed, with heart-stopping overlooks and tortuous roads, grottoes, cobblestone streets, historic and charming towns, and azure waters. The surroundings are simultaneously so gorgeous and treacherous that you need to stop ogling them now and then so you won’t plunge over a cliff or get sideswiped by a bus.

Also, the food is wonderful — and probably even healthy, if those latest rumors about the benefits of a Mediterranean diet can be believed. I like those rumors, even if my own diet tilted heavily toward the gelato. Carpe dulce de leche!

To get to the house my brother- and sister-in-law had leased, you had to descend down a billion steps, give or take, from the road. I think they called the steps rustic in the brochure, which beats a lot of other more appropriate modifiers like deadly or harrowing. The first day I descended them — with rain beating down and the wind howling and the surface slippery and my neuropathic feet skidding — I decided I’d just stay down there for the rest of the week and just send out for pizza. Kidding, almost.

(So you can see that I’m not completely exaggerating, as usual, here are some of the stairs, which go on and on forever, too far for any camera to capture:) 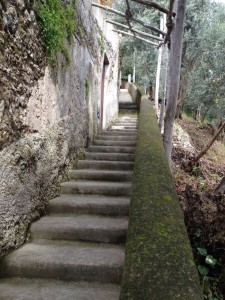 The next morning, in a better mood, I trekked upstairs with the other guests and didn’t die en route. The staircase comprised 237 steps, someone calculated, which was the equivalent of eight flights of stairs. It made me feel both better and worse to hear that.

The days passed — glorious, sunny days of stunning views and steaming pasta. I traipsed up and down the staircase a couple of times a day. I didn’t grow to like it and I didn’t get any better at it.

“I thought I was in better shape than this,” I complained to my husband, who has an annoying habit of getting up early and jogging every other morning whether we’re in West Texas or Amalfi or New York City. “I’m on the elliptical a lot. I should be in great shape.”

He told my my problem was that I didn’t push myself enough on the elliptical. All I did was climb on it and read a book for 45 minutes. What I really needed to do, he said, was to sweat and be miserable and hate every minute of it — the way he did. That way, I’d improve my cardiovascular health and probably be leaping all over the staircase and throwing a party right now.

“You know I don’t like to sweat,” I pointed out. “If I exercised like that, I’d never go to the gym. I’d stay on the couch eating bon-bons all day and trying to get over the trauma.”

He just didn’t understand, I told myself, that my whole theory of exercise — which I’ve honed over a lifetime — was to pretend I wasn’t exercising while I was exercising. After all, I don’t like to suffer. My so-called regimen was kind of like reading a book that was bouncing up and down. Some days, in pursuit of what I call cross-training, I would actually get off the elliptical and amble to the stationary bike, where I could read even better.

As long as I didn’t know I was exercising, I would continue to do it, I reasoned. It was kind of like sneaking kale into a shake and pretending it was quite tasty and not even good for you. (It even had the added benefit that you didn’t have to spend the rest of your day picking kale bits out of your teeth.)

Anyway, it’s funny how travel — especially foreign travel — has a way of making you confront unpleasant truths about yourself. Somehow, the absence of the familiar can strip you bare of all pretensions.

For example: You think you speak passable French, which used to be the truth. So who is that idiot, then, who is tongue-tied and panic-flooded in the middle of a haughty boutique on the Left Bank after she has started the conversation with a pretty good Bon jour? Oh, yes, that would be moi.

And now, this: the allegedly fit woman who had thigh spasms over a few rustic steps.

I suppose I could have ruined the whole trip by deciding I was in pathetic shape and needed to completely overhaul my life and routine and devote the last few good years of my life to suffering and sweating and pure misery. Or I could just continue as I was, reading and bumping and ignorant in the gym, and suggest to my brother-in-law that for his 70th birthday we decamp to some equally picturesque joint with an elevator.

As you can imagine, I didn’t have to think about that one too long.

For another enlightening post on travel, read I am My Own Sherpa, Among Other Things

14 comments… add one
Travel and Enlightenment, Part Two
Eating Used to be So Simple