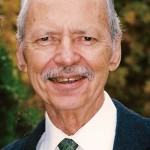 1)  It’s early on Saturday morning.  My husband, already dressed, comes back into our room.  He seems to be speaking a foreign language, something I can’t comprehend.  I stare at him.  He repeats himself.

2) My father was 85.  In some ways, we had all the notice in the world that this would happen.  He was diagnosed with Alzheimer’s in 2000 and has stayed in assisted living the past 10 years.

3) Unlike many other Alzheimer’s patients who quickly sicken and die, he had a very gradual decline.  Physically, he seemed robust — healthy and in no pain.  That’s what I mean when I say that, in other ways, this is a complete surprise.

4) “I checked him in the middle of the night and he was fine,” says one of the women who took care of him.  “Then I went back an hour later and he was dead.  He looked like he was asleep.  He was so peaceful.”

Earlier in the day, Daddy was more coherent than he had been recently.  When he talked, he made sense.  “He kept telling me ‘bye-bye,'” the woman says.  “He kept saying that over and over again.  ‘Bye-bye.  Bye-bye.'”

5) My sister, my only sibling, is in Poland.  My call won’t go through.  Skype doesn’t work.  I email her, which seems terrible, but what are the choices?

6) I finally reach my sister.  She tells me three things:  1) Daddy would want an American flag to be buried with him; 2) he loved me, even though I never thought he did; and 3) I took good care of him through the years.  I am sure she’s right about the American flag.

7) “We’re adults,” my daughter tells me over the phone, speaking of herself and her brother.  “You can lean on us, Mom.  You don’t have to do it all yourself.”

8  What went on in my father’s mind?  I used to wonder that during the early stages of his dementia.  Where was he?  Where was his mind?  He wasn’t who he used to be, so where had that person gone?  Is he whole now?

If you believe — as I do, I think — in the idea of a soul, then Alzheimer’s deeply fucks with your beliefs.

9) I have dealt with this funeral home before, when my mother died in 1997.  I call it the House of Death.  Its employees are unctuous, their voices syrupy and solemn, their for-sale items tacky and astronomically priced.  I don’t hate all undertakers; after all, I watched every season of “Six Feet Under.”  But I do loathe the House of Death.

10) “We need to get your sister’s signature if you want to cremate your father,” the House of Death representative tells me in sepulchral tones.

“Because cremation is an irrevocable act,” Morticia says in her bell-tolls-for-thee voice.

She must mean the beach at the Baltic, I think.

“They’re crashing so loudly,” she says.  “I can’t believe you can’t hear them.”

12) My father was born at home in 1924.  He was a surprise.  My grandmother gave birth to one baby, his twin sister.  Then a second baby appeared, much to everyone’s surprise.  It was my father.

His parents named the twins Hiram and Hira.  You think that’s bad?  They had twin aunts named Okla and Homa, reputedly the first twins born in the Oklahoma territory.  This led me to think some families shouldn’t be allowed to name twins.

13) In recent years, I realized no one can pronounce “Hiram” any longer.  “Eeee-ram,” they say.  Go to any soccer field.  You won’t find families cheering for their little Hirams to score a goal.  It’s a name of the past.

14)My father was an athlete.  Everything about him changed when he was on a sports field.  He looked taller and stronger and more confident, the way he never did at work.  Here’s a story about that — about what I think of as his real life.

15)  Daddy grew up during the Great Depression in a desperately poor family.  His alcoholic father drank away every cent he earned.  When creditors came to the house, my grandmother sent one of her older sons to the front door to say the family had no money to pay their bills.

Because of this background, my father lived in great fear of losing everything.  After he was diagnosed with Alzheimer’s, we took away his wallet, money and credit cards.  Every time he reached for his wallet to pay for something, panic would flood his face.  “Where’s my money?” he asked again and again.  I told him it was all right, that his money was safely hidden away and taken care of.  He was going to be fine.  “Are you sure?” he would ask.

16) The day my father died was a day nothing was right.  I didn’t want to do anything.  I just sat and stared.  Every idea to do anything was bad.  Except for making White Russians, which we did.  I don’t know whether that had something to do with my father or the Big Lebowski.  But it was my one good idea.

17) “I never understood your father,” my husband says.

I think I understood him somewhat.  He never asked for much.  He married a woman he was devoted to, he reached middle-class respectability, he left the memories of a hard childhood far behind.  I think he had what he wanted most in life.  I hope he’s at peace.