It’s September! It must be fall!

I know this because you can’t raise an eyebrow right now without hearing about football games or school starting or the latest fall fashions. September’s on the calendar, in the newscasts, planted firmly in the zeitgeist.

Thinking about it — this new, exciting season! — I get a little shiver. Isn’t that a nip in the air I just felt? No, it’s just the air-conditioning going full throttle.

You see, September is a highly confusing month if you live where I do, in the middle of Texas. September promises so much, but it delivers hot air.

At the end of the heinous, hellhole summer of 2000, if my fried brain cells recall correctly, September served up an endless furnace of triple-digit heat day after relentless day — 113, 115, 110, and so on. I’m pretty sure those were Fahrenheit temperatures, but come on, who knows and what difference does it make?

The triple digits were excruciating, but really, it was September itself that was the coup de grace. We expected better! We had been misled — by the calendar, the national media, the endless hype of autumn. Year after year, we learned the same bitter lesson that no, we weren’t all in it together.

You were basking in the gently slanted sunlight and breathing in the crisp, cool air; we were blinded by the merciless sun and shake-baking in the inferno. You were getting out your cashmere and longer sleeves and darker colors; we were staring disgustedly at our limp, sweat-soaked shorts and T-shirts (which, frankly, should have been incinerated and/or fumigated in July), wondering if we could bear to wear them again.

But, it’s always been like this. I should have learned. But, oh, no.

Growing up in West Texas, I was the overly bookish sort of kid who got her ideas about life and seasons at the library. I’d bring home piles of books that assured me that autumns were glorious, teeming with brisk days and cold nights that turned the trees fiery red and orange and amber. You could rake leaves and jump in them, you could shiver by the fireplace till it warmed you.

Sometimes, I looked up and out the window, sometimes I even opened the cranky venetian blinds. It was always a big mistake. I was usually eyeball-to-eyeball with whatever spindly tree had been planted close to our house. The tree was always staked to the ground so it wouldn’t blow away in the fierce winds.

(The wind — oh, the wind! It blew every season, spreading red dust under the doors and windows, smacking you in the face when you went outside and hitting you so hard it almost seemed personal. The wind, I should tell you, is why so many Texas women layer blast half a can of hair spray on their hair every morning; what other choice was there if you wanted a perky bouffant?)

But, anyway, nothing said fall like the West Texas wind, even though the wind also said winter, spring, and summer. And you know the rumor about leaves turning color? Well, ha. That’s all I have to say. Ha. The only trees that could make it in West Texas were mesquites — gnarled and low-lying and tenacious, which is kind of similar to West Texans themselves; that land molds you if you’re going to survive. 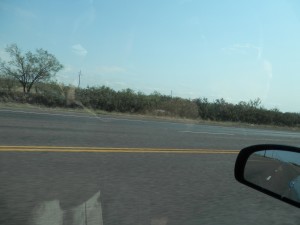 Mesquites were unbeautiful, but by God, they were ours. I was 40 before I ever heard the term trash tree applied to mesquites. It shocked me so much, I almost took to my bed. I had spent my youth in the company of those maligned trees, marveling at their greenness, their existence, how they broke up the flat landscape and provided visual interest. Calling them trash trees was a sacrilege.

But, you know, mesquites just didn’t deliver when it came to foliage. I had to move to Central Texas to find leaves that turned lovely colors.

Not that they turn in September. Nope. We have to wait a couple of months. We do have September in Texas, but we call it November. It’s like I said: The land molds you if you want to survive.

Read The Day the Possum Escaped From the Zoo

their seasons are not our seasons

7 comments… add one
Indifference and Beauty
My New Squeeze