The first thing you should know about Frankfort, Kentucky, is that it’s the state capital.

Not Lexington or Louisville or any of the more obvious choices, but Frankfort. Like the other, unfamiliar state capitals of Carson City, Nevada, Augusta, Maine, or Salem, Oregon, Frankfort could always come in handy if you’re in a trivia contest; you never know when one of those events is going to pop up in your life. Better be prepared, I always say.

Frankfort is also a pretty little town of rolling foothills, a looming state capitol building and Daniel Boone’s monumental gravesite. More important to me, though, is the second thing you should know: It’s where my sister got married this week.

She and her now-husband Mike got married 24 hours after the tornado sirens wailed, a funnel cloud hopscotched around the town, and the rain was so torrential it slanted horizontally. (My sister has always liked drama.)

By the time they said their vows in a nearby nature preserve, though, the clouds were white and harmlessly puffy and the breeze was mild. My sister looked radiant in a deep purple dress Mike referred to as “eggplant” and a neutral-colored hat. Mike, whom I’d just met the day before, looked pretty good himself. 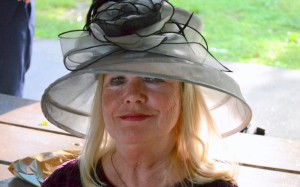 The officiating judge wore his black robe and spoke in a deep, appropriately respectful baritone. The guests — 30 or so who were mostly Mike’s friends and family, since Frankfort is his home town — gathered around in a semi-circle.

Both my sister and Mike were widowed after long marriages. They had worked together decades ago at an El Paso radio station and became friends again over the Internet. When I heard Mike had traveled with my sister to some of her favorite haunts in Eastern Europe like Sarajevo and Bucharest, I realized it must be love.

My sister has lived abroad for most of her adult life, first in Israel and now in Poland. Her life and mine have been almost entirely different — hers adventurous, childless, and — again — full of drama. I’m forever fascinated by the vastly different wants and needs people have in their lives, in what is most important to them.

So, in many obvious ways, my sister and I are very different. But that overlooks the profound ways she and I are so similar. We have virtually identical senses of humor, writing styles, minds and curiosity about the world. She is the person who came and stayed with us when I was diagnosed with breast cancer, who sat and watched movies with me in the afternoon till I fell asleep, who came along when I got my hair shorn off before it fell out.

“You have nice ears,” she said, staring at the floor. She didn’t know what else to say, she said later; what a stupid remark. I felt differently. It made me smile at a time when I didn’t have much to smile about.

In so many ways, she and I understand each other better than anyone else ever will — husbands, children, or good friends. We were the only two who shared a childhood in a series of small ranch houses in desolate towns where the wind spat red dust. We were the only witnesses to a family life with a treacherous undercurrent of bitterness and rage. (I’ve never quite understood people like my husband who had happy childhoods.)

But that was the long-buried past. In the present, I saw my sister happy and in love with a great guy who is crazy about her. I can think of few things in the world that could make me happier. May they have a wonderful life together.

My sister is an excellent writer. Please check out earlier posts she’s written for this site on: teaching English in Poland, Polish traditions, Fat Thursdays, and recovering after a great loss