On a trip to New York about 10 years ago, I was chided by my editor and friend Marc, who’s a native New Yorker, because I was “too polite.”  He told me I was wasting my time and everybody else’s by my interminable pleases and thank-yous.  In this part of the world, he told me, people weren’t rude; they were simply brisk and efficient.  Unlike, say, me.

Well, some things you can change about yourself and some you can’t.  I’m so southern, so polite, that I’m capable of walking into a tree and saying, “Excuse me.”  It was drilled into me at an early age and I’ve stayed drilled.

Besides, as I like to frequently point out to him, Marc and his family have since moved to the suburbs.  What does he know?

So, anyway, I’ve been politely exploring the city.  We saw Tarentino’s new movie, “Inglorious Basterds,” which had the same cartoonish, black-and-white moralism as a Western.  But then, I’ve always liked Westerns and, if you can’t be black-and-white about Nazis, you might as well paint the whole world an unbecoming gray.  The audience burst into applause at the end; we wondered whether  this happened in other cities and whether the movie will be showing in Germany.  I’m thinking no and no.

Then, Saturday afternoon, we went to the West Village to see the new production of “Our Town.”   I’m wondering how many plays I can drag my husband to before he rebels — but I’m going to get to every performance I can while we’re in the city.  At some point in my life (probably when I finally wised up and stopped sitting in cheap seats behind pillars, where I couldn’t see or hear most of the action), I fell in love with the theater.  It’s one of the greatest pleasures of my life to go to plays and performances — like this production of “Our Town” — where a new world gets created out of the genius of writers, actors and stagecraft wizards.  What makes theater different, I think, is that the audience has to participate in this joint act of imagination — or it won’t work.

Something I also love here is that I see person after person bent over a book — in subways, in parks, in restaurants.  Maybe they don’t realize no one is supposed to be reading these days.

For the first few days we were here, my husband wandered around in a cap with a Buick logo on it.  God.  I worried that this might be taken a little too seriously, given our age.  Finally and fortunately, he junked it.

“I just don’t think New York was ready for the irony,” he said.

I told him I’d ask Marc about it.  Even though he’s in the suburbs, he might still have an opinion. 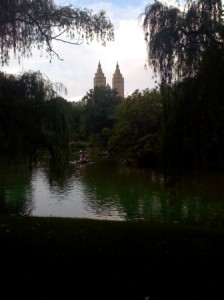 Photo taken by James W. Pennebaker, known in this blog as "my husband."