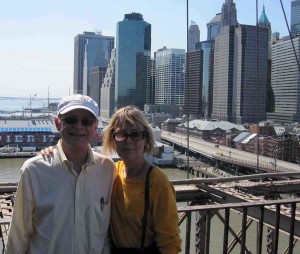 Sometimes I wonder about people who live in the New York area.

I’m not just talking about the social moron I met at a party recently, who told me he could never live anywhere in Texas.   He and I went on to have quite a spirited conversation after that salvo, with me calling him a pompous twit and noting what did he know, since he lived in New Jersey, for Chrissakes?  As usual, the insulting and confrontational remarks were all in my mind, where they continue to replay even now and are really quite devastating.

Anyway, other New Yorkers.  Sunday, a gorgeous day, we climbed the Brooklyn Bridge with our friends Mary Jo and Bill.  They’re the New York experts, since they’ve lived here forever, and I thought they were doing us a big favor by climbing the bridge for the umpteenth time just to keep us company.  Exactly how many times had they already climbed the bridge? I asked them.

Oh, none, as it turned out.

In spite of our New York friends’ lack of leadership, we managed to find our way to Brooklyn just fine, where Mary Jo and Bill had promised us the best pizza on earth.  Unfortunately, Grimaldi’s was closed on Easter Sunday, which left the two of them so crestfallen that Bill immediately came down with a cold.  Luckily, my husband — a Texan with an iPhone — scoured the Yelp reviews for a nearby restaurant that was superb.  Noodle Pudding, the restaurant, was Italian and filled with big families who looked as if they’d just gotten out of church.

The olive oil and bread were wonderful and my lasagna bolognese so good I found myself guarding it with sharp elbows, since it was only big enough to serve five people.  (Bridge-climbing builds up an appetite, it seems.)  We ate and ate and ate, watched the other people (a different, homier crowd than you’d see in Manhattan); Tony and Carmela would have fit in there just fine.

What a wonderful spring day and what an incredible bridge, with heart-stopping views of Manhattan.  I thought of our dinner earlier in the week with the son of a friend who asked us why we’d chosen New York for the year when we could have gone anywhere, really.

“Like where?” I asked him.  “What would have been better?”

“Colorado,” he said, finally.  “Or somewhere out in the country.  You could have gotten a lot of writing done there.”

“I would have also lost my mind and died of boredom,” I said.

So I spent the rest of the evening pointing out this and that — the restaurants, the theater, the vibrancy, the cultural mix! — you could only find in a great city.  Which may have sounded as swinish as the creep trashing Texas, but hey, we were paying for dinner.  You get defensive about a place, even when you’re only there temporarily.

“What did you do over the weekend?” my New York dermatologist asked Monday.

I told her we’d climbed the Brooklyn Bridge.

“You can climb it?” she asked doubtfully.  “I’ve never heard of that.”

There you go.  Maybe that’s why we’re spending the year in the city: To help New Yorkers get to know it a little better.

Read one of my very favorite posts about driving through emptiness