You know how it is in neighborhoods — even the friendliest ones: People are often, deep down, a little competitive. They show off their yards, their kids’ achievements, their teams’ victories.

And, if you live in the part of world I do — where the seasons are roughly summer and non-summer — people tend to over-compensate by decorating the outside of their houses so you know what season it is. Who cares if there’s no snow and it’s 70 and balmy? You can tell it’s the holiday season when the Christmas lights go up.

All of this continues, in its own way, even after you’ve moved into a condo like we have. We no longer have yards (thank God), so outside decor and landscaping aren’t competitive sports any more. We don’t have individual roofs to decorate, either, so my husband and I no longer have knockdown drag out battles about our holiday lights still being up in July — so what’s the problem? It’s almost Christmas again, anyway! Chill!

Anyway, everything was pretty calm in our new neighborhood till our friend Mary nominated her golden doodle, Keeper, as Pet of the Week since Keeper was so well-behaved and photogenic. Nobody even knew anything about this Pet of the Week business till Mary brought it up, posted a fetching photo of Keeper, and promptly hogged the first award.

“That’s not fair,” my husband grumbled.

He was miffed because — unlike most of our friends in the building — we don’t even have a dog. So we’re not in their insider clique and how on earth were we going to compete in this Pet of the Week competition if we didn’t have a pet of any kind?

I didn’t think much more about it till later, when I noticed my husband photographing our little basil plant. He’d plastered a party name tag on the bottom of the pot, too, with BASIL in big letters.

“Good grief. What are you doing now?” I asked him.

He shook his head, appearing to despair of my lack of imagination.

He took a final (flattering) photo. “I have to be careful about the light,” he said. “I don’t want Basil to look too peaked. Want to help me write his entry?”

Well, since he put it that way — how could I resist?

“I think it will be kind of a personality profile,” I said. “You know — like a singles ad.”

So, we both pitched in:

BASIL PENNEBAKER FOR PET OF THE WEEK! 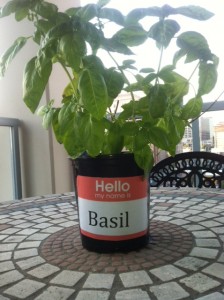 A little about me.  I’m quiet — a bit of a wallflower.  I like standing in the rain and the warmth of the morning sun.  I’m more of an observer than a doer.  I am a big believer in feeding others.  Even though I’m 100% green, I’m apolitical.
I have found the urban life surprisingly serene.  If Thoreau had been a plant, he would have really liked it here. (Heh-heh, a little herb humor there.)
In any case, thank you for considering me for the award.
Basil Pennebaker

A few days later, we ran into Mary, who was walking Keeper. We asked her if Basil had won the Pet of the Week award after our little media campaign. She said yes, she thought so, since no one else had entered.

“I guess people were afraid to compete with Basil,” my husband said.

Mary agreed that yes, Keeper and Basil had set a very high standard.

Well, but you know how fame goes. Basil basked in it for a while. Then he began to wilt a little. His leaves yellowed and withered. Even his name sticker faded. He just isn’t the plant — the big star — he used to be. Sometimes I think he’ll soon be joining a long list of houseplants we’ve lost over the years — most memorably, our late schefflera after somebody emptied a Bloody Mary on it. (It died happy, we always told ourselves.)

At any rate, we’re retiring Basil from the campaign circuit. Enter your own pet, your plant, your fungus — but beware. Fame and popularity can simply overwhelm anyone who doesn’t have Basil’s deep roots.

Read about how exclamation marks are ruining our lives!