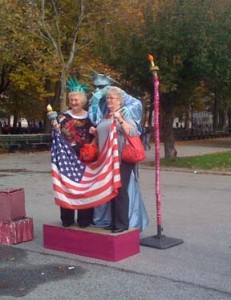 Warning: There are only two women in this picture

Believe me, after two hours in the line to get on the ferry to go to Liberty Island and see the Statue of Liberty, I was feeling kind of huddled and yearning to breathe free.  But we’d already shelled out $40 for our day passes, so we hunkered down.

“I think this is what the immigrant experience must have been like,” my husband said.

But the weather was flawless, with brilliant blue skies, and we watched four Statue of Liberty imitators mug and pose with bystanders.  The Liberty stand-ins were all, I should add, males, for God’s sake.  The woman next to me and I thought the smallest one on the left might possibly be female, but then the small one’s voice rang out and it was basso profundo, if you know what I mean.  I’d already wondered what it must be like to wake up in the morning and get into character as the Statue of Liberty — and now we were realizing it was a drag show.  Enough with the sexism, boys.

The line grew and grew, stretching back to the Upper West Side, as far as we could tell.  We listened to a flutist play a highly melancholy version of The Battle Hymn of the Republic, which may have been the only tune he knew, since he played it over and over.  Then we moved several yards and listened to someone else hop around and play a steel drum.  That’s what I love about New York: the party never ends.

My husband and I discussed all sorts of alternatives to waiting in line, such as mentioning my oppressed status as a member of the Chickasaw Nation, which should — if life were fair — catapult us to the beginning of the queue.  But life isn’t fair, especially when you’re an Indian, and we continued to wait.  Finally, we made it into a white tent, where we had to go through a security check similar to an airport’s.

The screener on our line must have gotten waitlisted from her tryout to star as Ilsa, She-Wolf of the SS.  “WAIT!” she screeched at me.  “I told you to wait.”

Since I have become very mature in my old age, I kept my mouth shut (the failure to do so once having almost resulted in our getting deported from the British Isles).  But all I could think was, “At least you don’t get to play the Statue of Liberty, bitch.”

In spite of all the drama, we sailed to Liberty Island and walked around the grounds and looked at the massive, gorgeous statue from all vantage points.  At a point when I’ve been reading the fine and haunting book, The Hemingses of Monticello, I’ve been thinking a lot about the beginnings of this country and how noble, but dramatically flawed and tortured the Founders’ ideals were, it was a good time to make this visit.

I’m always American — and Texan — in spite of myself.  So I can love that copper statue and what she’s meant to generations of immigrants and regret the hypocrisies and shortcomings — and the fact four men were on the shore impersonating Lady Liberty.  After all, if you look closely enough, you’re always going to find something that’s a drag.