It had been sweltering and miserable in Austin for a few days, but then a cool front edged its way into town and the temperature plunged into the nineties. The front coincided with last Monday’s march on the state Capitol for women’s rights, which convinced me that God must be a pro-choice woman.

Speaking of which, I was with my daughter. She was in town to hunt for wedding venues, but it isn’t every day you get to storm the capitol with a member of your immediate family.

So, we wore identical orange T-shirts marking us as part of what the Republicans had called an “unruly mob,” with definitions of the term on the shirt back. I.e., “unruly” refers to women who aren’t docile, and “mob” is a group of two or more women who don’t know their place. So many people took photos of those definitions that I’m pretty sure my back is now famous. 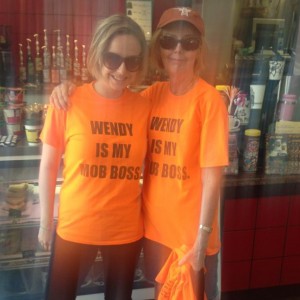 At the capitol, the crowd was large and loud and dressed in orange. Wendy Davis spoke, along with other prochoice politicians, and Natalie Maines, the Dixie Chicks powerhouse, sang. “I feel sorry for the Republicans,” one young woman in orange commented. “They don’t have any decent entertainers to haul out — have you noticed?”

The crowd screamed and raised placards telling Texas Governor Rick Perry to keep his mits off their bodies and state government out of their uteruses.

I sat under a tree, where the view was bad, but who cared? I wasn’t one of the young people who could walk and scream and text and tweet at the same time. My idea of multitasking is writing and breathing at the same time.

The rally went on and we finally staggered home. The next day, we showed up again at the capitol, this time for testimony in the House on the anti-choice bill. The testimony had been rescheduled at the last minute, then thoughtfully confined to a small hearing room. For a bunch of guys who so deeply care about women’s health, the Texas Republicans don’t seem to show much interest in seeing women in the flesh.

I waited in line for hours to get into the hearing room. Around me, the pro-choicers in orange and forced-birth advocates in blue eyed one another warily. For the most part, no words were exchanged. When people from the two sides bumped into each other or approached a closed door, they were almost elaborately polite to one another. Most Southerners would rather drop their pants than their manners; we simply can’t help ourselves, except at football games.

Finally, at 8 pm or so, I was allowed into the packed room. Person after person testified about the proposed bill — male, female, young, old, conservative, liberal, you name it. They whispered, they spoke loudly, they were furious, they were weary. They’d been wronged by abortions, they’d been butchered by illegal abortions, they all wanted to protect women, they all cared — every last one of them.

You go numb after awhile, being around so much passion and heat and certitude. More than numb, you also grow weary and wonder where this will all lead. How much fury and money and decades and energy will be spent to continue this impasse and sheer insanity? Both sides, at this point, are implacable.

I should know. I’m implacable myself. Sick and tired of it all, but implacable.

Tell me you’re pro-life. Fine. I believe it. I can feel your sincerity, your concern.

But tell me you’re also doing everything you can to make abortion unnecessary — such as insisting on sex education and available contraceptives. Tell me you not only weep for the little fingers and toes of the pre-born — but you support single mothers and their children with health care and education and employment training and daycare.

Do that, please. I’d love to hear it. Until then, your fevered words and sentiments and tears are empty and cheap political theater — and there’s nothing for any of us to talk about. We’ll continue to meet like this and scream and shout and never hear one another.

We have so many other problems we should be addressing now, such as poverty and education and health care. But we’ll never get there, will we? We’ll continue to play our parts and scream our lines, I often think, while the whole world falls around us. It’s politics, it’s democracy, it’s ugly, it’s noble, and I just hope we can put the whole shebang back together one day.