I like Canada so much that sometimes I think my husband and I should just get it over with and move there. I mean, we speak the language(s) and that country’s politics and beliefs are more similar to ours than our own nation’s.

I mention this to my husband. He looks around. It’s mid-June in Nova Scotia, the sky leaks rain, the temperature hovers in the low 50s. “I think the winters would probably do us in,” he says.

He has a point, I think, assuming Canada’s winters are colder than their summers.

You are also supposed to talk very loudly so the bears know you’re coming and can get out of the way and go eat a quiet person, instead. This accounts for my behavior today. Normally fairly low-key, I am stomping through the woods speaking to my husband in all-capital letters.

“WELL! HERE WE ARE HIKING DOWN A PATH!”

“WE’RE BOTH SO THIN! I DON’T THINK WE HAVE MUCH MEAT ON US! NO SMART ANIMAL WOULD WANT TO EAT US!”

“WELL!  HERE WE ARE HIKING DOWN A PATH!” (I am not much of a conversationalist while hiking in dangerous terrain.) (I do realize that, if we run into other humans, I will be totally embarrassed about making such a racket. But, on the whole, I would rather be embarrassed than eaten.)

You are also supposed to puff up and act big when you see a bear and don’t even think about trying to feed it or its cubs. It’s OK to turn your back on them and walk slowly away, but forget doing that around coyotes.

Good grief. In the first place, what are coyotes doing in Canada? And, what am I — a veterinarian?

A couple of things slowly dawn on me: 1) My idea of nature is more like, say, Central Park or Austin’s Hike & Bike Trail. 2) If I am going to feel safe in the woods, I should probably be carrying an automatic rifle, even though I am a decisively anti-gun person the other 99.99% of my life.

This leads me to think that maybe I am more American than I thought.

We drive across the gentle countryside of Prince Edward Island. We explore the craggy heights of Nova Scotia. 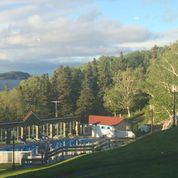 We take a six-hour ferry to the sparsely settled towns and countryside of western Newfoundland. 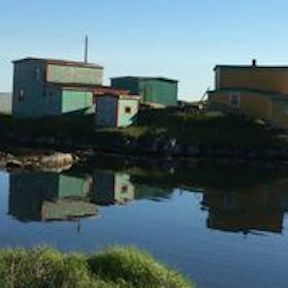 We eat lobster and then we eat more lobster. 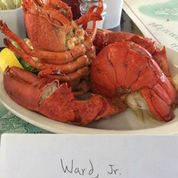 Over the years, I’ve become convinced that the enjoyment of a vacation is more dependent on whom you’re with than where you go. Go with a humorless, unsympathetic traveling companion and the most enchanting places on earth lose their sheen. Go with someone you have fun with, and even the most unfortunate trips — where you miss your connections, where the hotel sucks, where you get food-poisoning from the guacamole –have the makings of a legendary experience you can tell and re-tell (once you’ve stopped vomiting, anyway). When you’re with someone you enjoy, the scenery becomes more of a backdrop to your conversations.

So, my husband and I talked and we talked. We re-visited old trips, like the time we were stuck in a horrid hotel in Bangor, Maine, and smashed Bing cherries against the wall. (I am assuming that, 36 years later, the statute of limitations has run.) We discussed DNRs as we get older. We chatted about earlier times in our lives together — like the young-adult phase and the first-time parent phase. (Phases, it seems, only become apparent as you age; when you are living them, they are simply your life and will presumably go on forever.) We wondered aloud whether prejudice toward the obese will wane and become unacceptable in society.

We even talked about dreams. One morning, I woke up from a dream in which I was forced to shoot a dog to defend myself.

I stared into the distance and tried to look thoughtful. “You know,” I said, squinting, “now that I think about it … its face looked … well … just like … yours.”

I spent years scared witless of flying. Before every flight, I would look around the waiting area, observing the other passengers — the people I was doomed to die with. But why? I wondered. I didn’t know them well enough to die with them. I wasn’t even sure I liked them.

After decades of this untoward behavior, I somehow lost my fear of flying. It came about after I’d had a bout with cancer and realized what I feared most was inside of me — not lurking in the outside world. Since then, I’ve often fell asleep during takeoffs.

But I do have my limits.

“Guess what?” my husband crowed after we landed in Philadelphia en route to New York LaGuardia. “We’re flying this next leg on a propeller plane.”

Well, you might as well tell me we’re going up in the Hindenburg, for God’s sake. A propeller plane is not my idea of a safe way to travel. “Where’s the closest bar?” I asked.

“Prop planes are safer than jets,” my husband said for the third time.

“Where did you get that information?” I said. “It sounds specious to me.”

“I read it somewhere,” he said vaguely.

After I polished off a stiff Bloody Mary, we found the gate for the prop plane, stuck on the end of the airport’s seediest terminal. Passengers from the plane’s previous flight were exiting.

“I don’t know if you noticed,” I hissed to my husband, “but most of them were kissing the ground when they got here.”

My husband laughed. In fact, he laughed annoyingly most of the way to LaGuardia. “I just love prop planes,” he said unnecessarily. “You get to see so much more, since you’re down lower.”

I think seeing more is highly overrated. So is flying sober when it comes to propeller planes. As the survivor of a near-bear attack and a bumpy, highly dangerous prop plane ride, I planned to kiss the ground if we ever got to LaGuardia. New York — that’s my idea of nature.

Read about The Worst Houseguests in the History of the World

0 comments… add one
Question: Why Do We Cry at Weddings?
Dream Makers and Heart Breakers