If you’re a parent, you’re used to automatically telling people how many kids you have. It’s not always that simple, though. Sometimes, over the years, you realize a child in the neighborhood or one of your kids’ friends has become so close to your family that you almost feel like you belong to each other. He or she really isn’t your kid, of course — but, kind of.

That kind of closeness happened to our family just a handful of times. I’ll always wonder what happens to those young friends — where they go, what they do — and I’ll always worry about them and want the best for them. Xiaodi (pronounced shaw-dee) was one of them.

She was just 12 when she showed up at our house to answer a frantic ad for a babysitter we’d put in our neighborhood newspaper. She was small and short, but very self-possessed, even then; she and her family had moved to the U.S. from China only a few years before. We liked her, our kids liked her, and she seemed to like us, so she started working for us off and on. We called her the Big X. She showed up for those nights when my husband and I were so overwhelmed by the demands of family and work that we rarely finished a sentence for years. With Xiaodi taking care of our daughter and son, we could relax for a few hours and stop impersonating a couple of zombies.

The years passed. We left Dallas for Austin. By then, our kids had outgrown the need for babysitters. But my daughter and I kept up with the Big X. She came to see us in Austin a couple of times. Then, when my husband and I were in New York for the year, she and I had dinner when she came into town for a business trip. Xiaodi had worked in Shanghai as an Internet executive for a couple of years — and New York’s bustle and noise didn’t impress her.

By then, it was 2010 — and all our children had grown up. They had gone places my husband and I hadn’t been to, they knew things we didn’t know. I was used to it in that funny way a parent becomes accustomed to being surpassed. It didn’t surprise me any longer.

Xiaodi and her fiance, Allen, got married last week at the Brooklyn Botanic Garden. It was supposed to rain that day, but the clouds held and the outdoor ceremony proceeded. They married in front of a gorgeous weeping willow, as the cicadas hummed in the background.

I sat with our daughter, both of us smiling broadly and tearing up. I thought how this was one of the moments we all live for, when we’re encircled by life. I could see it all — the small children now grown large and capable, the young babysitter who came knocking at our door, the fast-paced years that were over, what had vanished, what had not, the hurtling of time.

But somehow, it was all knitted together in those few moments, as two people started their future together. We laughed, we cried, we promised we would support them always. 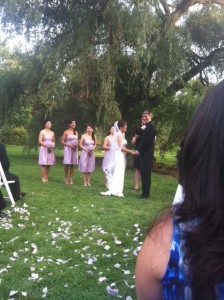 11 comments… add one
Read This!
The Newest New Yorkers