There are insanely adventurous diners in this world.

I’m not one of them.

I mean, I’ve eaten sushi, rattlesnake, hippopotamus, turtle, bear, alligator, and armadillo, so I’m not a total dud as a thrillseeker. But I won’t go near any kind of internal organs, suspicious-looking vegetables (sweet potatoes, eggplant, turnips, to name a few), goat, or goat cheese.

When my husband and I first met, he pointed out I ate only white and beige foods, like that was a big deal. Then, when we had kids, he hinted I was a bad vegetable role model for the children. Blah, blah, blah. Anyway, I’ve reformed and now eat all kinds of formerly dangerous vegetables like cauliflower, broccoli, and okra, which I like to loudly compliment myself for.

In spite of all my progress and sacrifice, my husband keeps pushing me, which is why we found ourselves at a restaurant called Mystery Cuisine when we were in Paris. I should have run when I saw the name. I like mystery in my books and my movies; I don’t like it on my plate or palate.

The server/owner kept bringing us weird dishes and telling us how to eat them and how to drink the accompanying wine. (Did I mention this was costing a fortune, even if the euro had taken a nosedive?) Sometimes, he lit dishes on fire. Sometimes, he showed up in a mask.

“I think this is one of those molecular cuisine joints,” I hissed to my husband.

“Isn’t it wonderful?” he said. “I think this is the most incredible meal I’ve ever eaten — ”

“I’ve always hated the idea of molecular cuisine,” I continued.

” — the way they combine the tastes and ingredients is remarkable — ”

” — and I would have been perfectly happy to die without ever eating the stuff.”

“I refuse to eat anything in a single bite,” I told my husband after the server left. “My mouth’s too small. And I’m so tired of looking at foie gras that I may join PETA soon.”

“The way they’re combining tastes is extraordinary,” he said. “It makes me think of food in an entirely different way.”

He looked almost seraphic. I wanted to strangle him.

“I hate it when people fetishize food,” I said.

“What they’re doing is pure art,” he said.

Art? Oh, brother. I finally said what I’d been thinking the entire billion hours we’d been there: “You know — it’s only food.”

“That’s a sad commentary,” he said.

“Also,” I added, “foam is not food. I’m a little tired of finding foam on every course.”

We ate seafood, we ate sauces, we drank wine, we inhaled foamy mystery dishes, and — did I mention it earlier? — we paid a fortune. The euro might have been down, but it wasn’t subterranean.

We ate, we paid, we flew home, but in many ways, Mystery Cuisine lingers with us. So far, I’ve had to listen to my husband rapturously recount the whole ordeal mouthful by mouthful. He told our friends John and Helen about it at great length. Helen was intrigued; John was not.

“It’s only food,” I said again, and John agreed loudly. (John and I have decided we were either married in a past life or maybe we were the same person. In our past lives, they probably didn’t have molecular cuisine.) 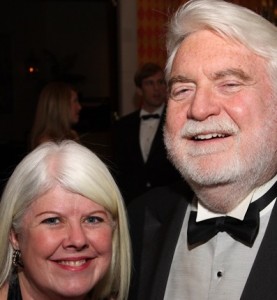 In fact, my husband ended up writing an over-the-top review on Yelp about how Mystery Cuisine transformed him and made him think differently about dining experiences. He may have also said something about a rich cognitive and theatrical perspective, but I’d nodded off by then.

I almost never write reviews for Yelp — but I’m pretty sure I know what I’d say if I did: Just four little words.

9 comments… add one
What’s Wrong With Men? (The Latest in a Continuing Series)
Leaving it All Behind