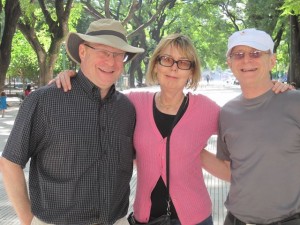 Question: Is there anything worse than walking with a man who has a GPS device in his hand and the absolute certainty he is right while you’re in a foreign city?

Answer: Yes!  It is definitely worse to walk with two such men and their crummy iPhones as they argue heatedly about who is right and whose blue dot is in the correct location.  In this situation, violence toward both the men and their blue dots may understandably be contemplated.

The two men who are bickering are my husband (at right) and his brother (left).  The strange city is Buenos Aires.  We have come here to celebrate my husband’s 60th birthday.  As far as I’m concerned, this is fine.  I’ve always wanted to come to Buenos Aires — and l’m a little tired of being the only person in the family who’s 60.  It’s about time I got a little company.

Maybe, my husband has said, since the water goes down the drain in reverse in the Southern Hemisphere, he won’t be 60 on his birthday.  Instead, he will turn 58.

We’re both going down the drain, I point out.  Does the direction really matter?

However, in the case of the iPhones and blue dots, the direction does seem to matter.  We have gotten lost on the way back from Uruguay and the farther we walk, the more unfamiliar it looks.  We plod along, through crowds, along dusty paths, inhaling exhaust fumes.  “I’m sure we’re going in the right direction,” one of the men says.  This is precisely the 85th time one of them has made a similar comment.  (Oh, yeah!  This time we’re definitely on the right track!)  I’m not sure which guy it is who’s talking; by this point, we’ve been walking so long, I can hardly tell the two of them apart.  I want to kill both of them equally.

I would ask somebody directions, but my Spanish is as shitty as the guys with the blue dots.  I have further been demoralized by the fact my brother-in-law has informed me that the double-l is pronounced with a “ch”-sound in Argentina.  This is exactly what I don’t need: To unlearn one of the few things I remember in Spanish.  I already have to work so hard to say “hola,” that I get a migraine by noon.  My Spanish, formerly bad, has become horrible.

“I think we’re getting close to the cemetery,” the man who may or may not be my husband says hopefully.  (Both guys are long on optimism, short on a sense of direction.  But I am listening to them!  What does that say about me?  Nothing good.)

But at least the cemetery would be good news.  It’s close to our apartment and we’ve already been there to see Eva Peron’s grave.  According to a shop-owner in New York’s Soho district, Evita was embalmed and looks quite natural — not at all like Madonna.  I would have asked somebody at the cemetery about the whole embalming question, but that stretches my shriveled Spanish vocabulary too far; I can barely say “dead” in Spanish.  This is of great interest to a woman who is seriously contemplating issuing an ultimatum to the two men she’s with.

Finally, one of the two guys, sensing he may not make it to age 60 no matter which way the water goes down the drain, waves his hand and hails a taxi.  We clamber inside and the taxi roars off.  The two guys chortle about what a great adventure this has been.  Getting lost!  What fun!  I try to indicate my total lack of amusement by using the universal language of women: The silent treatment.

We pass by the cemetery, which, of course, was miles and miles away from where we were.  Then we see our apartment.

Question: Is it a good thing — after all — not to get to the cemetery quickly?

Answer: Whichever way you’re going down the drain, in whatever continent, you might as well prolong the journey.

Read one of my favorite posts about who ever heard of a passport photo getting rejected?

25 comments… add one
Texas, My Texas
Thanking Your Lucky Stars