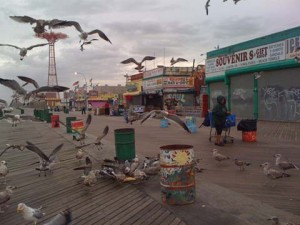 We know how to get to Carnegie Hall, but getting to Brooklyn is a little harder.  I printed out some subway directions from a website, which my husband immediately rejected.

“An hour and 20 minutes to get to Coney Island?” he sniffed.  “That’s ridiculous!”

Pretty soon, he was pawing around the Internet and subway maps and came up with an alternate plan he pronounced superior.  Fine.  Big deal.  I agreed to go with his idea, but kept a close tab on my watch.  It’s always good to be alert to those little “I told you so” opportunities in a relationship.

An hour and a half later, we got to Coney Island.  Coney Island!  There was the roller-coaster, even if it wasn’t in use, there was Nathan’s, there was the boardwalk.  OK, so we were kind of late for the official season, and it was raining intermittently and the wind whipped around and nobody was dressed in a bathing suit.  In fact, the whole scene, with its gray skies and metallic-colored waters and bundled-up walkers was more Bergman than beach-blanket bingo.  Still, I’d heard about Coney Island all my life, and here I was.

The usual bird nuts were feeding the seagulls pizza.  Men gathered in small knots to play chess and smoke and talk.  We stopped in a Russian restaurant to order a beer and watched as planes glided in to the nearby JFK airport.  Any minute now, I expected Tony Soprano to show up on the almost-deserted boardwalk and cut a deal.  Overhead, a red parrot in a cage kept watch, dangling from one of the beams; it was stuffed, we finally realized.  “Lower maintenance that way,” noted my husband, who has no particular fondness for birds.

Finally, we met another couple for dinner at a Russian restaurant.  She’s Russian, so took the lead in ordering.  “Are you adventurous eaters?” they wanted to know.  I never know how to answer that.  If I say yes with too much enthusiasm, I might end up eyeball-to-eyeball with live monkey brains.  If I say no, I’m boring, but I get to skip the primate course.  “Kind of,” I said.

So, we ate green and red borcht.  A salad of radishes, onions and chicken livers.  Rabbit stew.  Veal dumplings.  Chicken Kiev (I’m always adventurous when it comes to copious amounts of butter).  We heard about the history of the area, Brighton Beach, which had initially become home to waves of Russian immigrants when Krushchev allowed greater movement in the 1950s.

“This is my country now,” a Latvian waitress who had served us earlier had said.  She’d been here 12 years.

That’s one of the things I love best about this country — how it changes and becomes richer and more complex with each new wave of immigration.  How it looks different and sounds different, how the language and accents alter, how the food becomes more diverse.  I was so affected by these thoughts that I even managed to accidentally swallow a clump of chicken liver without gagging.  Who says I’m not adventurous?

Returning to Manhattan, the subway ride took only 40 minutes.  My husband said he considered our earlier ride to be a “moral victory” for him and his mass-transit calculations, since he’d pretty much tied the experts for efficiency.  Or maybe that’s how you figure out getting around in this city: Practice, practice, practice.