Who Do at Hill Country Barbecue Market 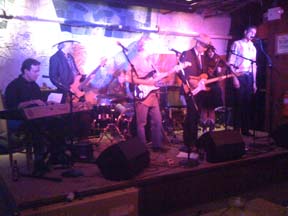 Sometimes, you just know things.  I knew, for example, that once my husband and I started walking the 55-block distance to see Who Do, an Austin band, on 26th Street that we’d never do anything smart like descend into the subway and ride half the way.  No, we just kept wandering the streets, propelled by the Saturday night energy and crowds through Lincoln Center and Columbus Circle, down Broadway through Times Square and into Koreatown, like a couple of zombies who didn’t know when to stop.

As usual, we’d forgotten to make reservations.  We spend our lives not making reservations and sometimes, we pay the price.  We ended up, exhausted and famished, at Hill Country Barbecue Market, where evidently everybody else in the five-borough area had decided to show up, too.

“Look at the line,” my husband grumbled.  “Do we have reservations?”

The two harried women behind the counter told us it would be an hour-and-a-half wait for a table.  They didn’t seem terribly interested in the saga of our 55-block trek, which my husband had taken to referring to as “like the Bataan death march, except a lot worse.”

If I’d had a medical condition, I would have brought it up, too, but I didn’t think imminent starvation would have flown for two people who look as well-fed and healthy as we do.  So, the next time a small knot of people with reservations showed up, I joined them, ending up in the dining area.  I motioned to my husband to join me.  He was standing about 10 yards behind me, still behind the counter, making faces at me.

“He needs to come in, too,” I told one of the harried gatekeepers.

I mumbled something incoherent and nodded and smiled.  My husband strolled past the counter.  At times like this, I realize being older has its advantages.  Younger people don’t like to pick on you, since you remind them too much of their parents.  Assuming they don’t loathe their parents, this can be quite helpful.

We made our way through the line, ordering a lot of meat and side dishes, then found a perfect little table where we sat.  “I don’t know why they said it’s a 90-minute wait,” I said to my husband.

Ten minutes later, we got evicted from our table by a couple of spoilsports who claimed it was theirs and one of the harried women behind the counter who gave us a lecture.  We gathered up our half-eaten meats and moved on with as much dignity as you can project while trying to hold on to greasy pork ribs, two Tecates, and a flimsy container of maccaroni-and-cheese I’d just begun to address.

“Baby Boomer haters,” I told my husband, who said he knew we were going to get into trouble, and it was probably all my fault for being so pushy.  I pointed out we wouldn’t have half-full stomachs if it weren’t for my pushiness, for my taking control of the situation, but he continued to grumble.

We wandered downstairs, carting the remainder of our dinner with us, and listened to our friends’ band, Who Do.  They were excellent, they were rocking, they were loud, and we all sat around swaying and thumping to the music.  “Do you go out to a lot of live music in Austin?” somebody asked us.  No, of course not.  We go out to live music in Austin about as often we make dinner reservations.

But here, with a facsimile of the Texas flag behind the stage, with the pungent scent of barbecue in the background, with our accents growing flatter and broader from the atmosphere, the beer, the down-home bonhomie, it was all wonderful.  I finally got to see two famous people in the audience — Dan Rather and Calvin Trillin — and whispered to my husband that I was glad we weren’t from some boring, square-shaped state.  At least we had an identity, mangled and tarnished as it gets under certain presidential administrations.

“Do you all know where Wink, Texas is?” one of the band members asked the crowd.  Hell, yes, we know where Wink is.  I also knew there was no damned way we were going to be walking the 55 blocks back to our apartment, so somebody had better call us a taxi.  I just hoped the women behind the counter weren’t holding a grudge.